It isn’t often I don’t know where to be in Grasmere! However yesterday I was literally up hill and down dale. The reason for my indecision? The Tour of Britain Stage two was heading though Grasmere. 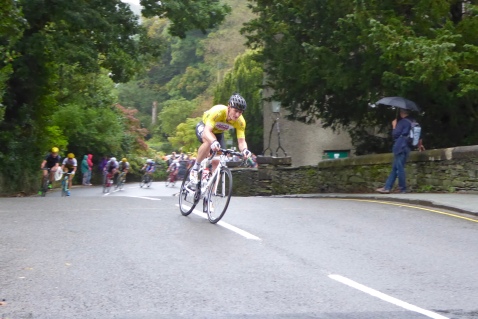 My initial thinking had been to head up Dunmail Raise and get some arty, cyclists flying down the road with the Lion and the Lamb in the background shots. The weather wasn’t playing that way I could hardly see in front of my face for the drizzle. Ok how about just past Penny Rock? Went down there and it was way too dark. Back to the village to look at the Sprint end Stage.

Setting up Sprint end in Grasmere

They were just setting things up but chatting to the folk there it seemed that a straight with a bend might be the best place to be. Oh by the way, have you noticed we have put our redundant phone box to good use. It now houses a defibrillator. 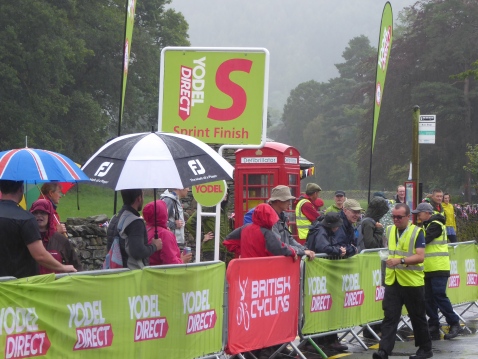 Final decision was to stand just beyond Church Bridge to catch the action, while cunningly positioning husband further down the village.

The sound of a helicopter overhead and a several Police motorbikes heralded the cyclists arriving. First through wearing the yellow jersey was Greipel then the others including the peloton followed in quick succession.

After the first three, the riders came quickly through the village 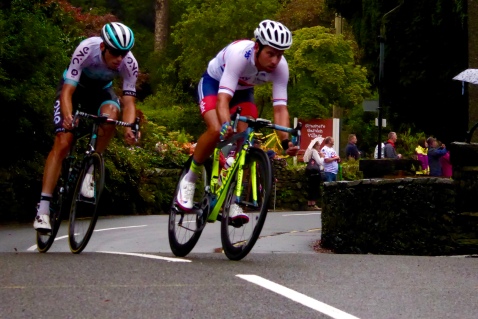 While I like to take still photos, husband was in full slow motion filming mode.

The cyclists fairly flew over Church Bridge. I was slightly distracted by an American Coach which had obviously decanted it’s tourists to pick up gingerbread from the Gingerbread Shop. They obviously hadn’t a clue what was happening, some of the comments were hilarious. 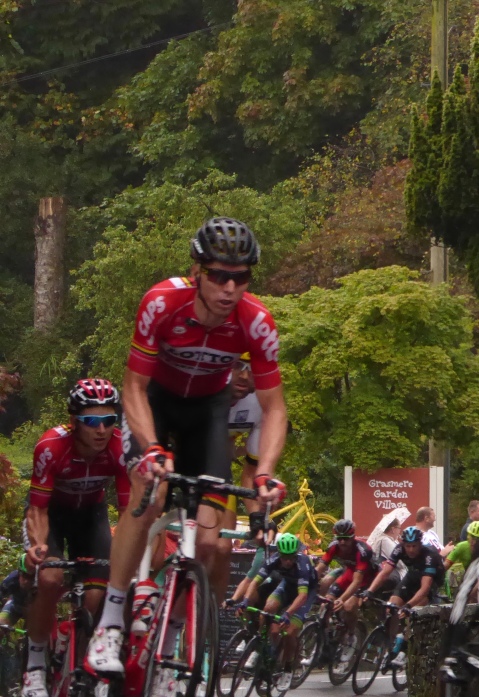 And then they were past. Many vehicles with cycles on their roof racks followed. 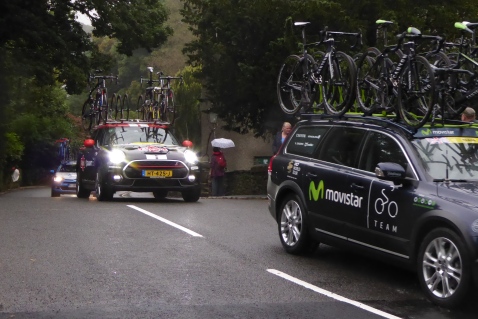 Next stop the struggle in Ambleside. Mention must be made of Grasmere’s own Knit and Nat group. They had done a sterling job knitting little yellow jersey bunting. It looked fab if a bit wet on the village green. 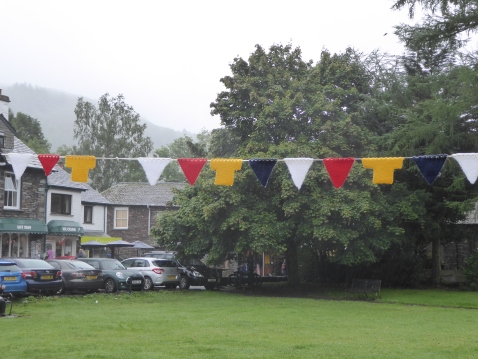 Another nice surprise on the day was bumping in to Viv who used to manage the National Trust Shop in Grasmere. She now lives “down south” but was having a holiday in the area and knew if there was something on in Grasmere she would spot me somewhere. While waiting for the cyclists we had a good catch up, so you see, I did choose the right place to stand after all.