As a young student straight from Art College I applied for a summer job working in Grasmere Village. My interview took place in the then Prince of Wales Hotel bar. At the time, this was one of the best places to visit and stay in Grasmere. That summer job ended up being employment that lasted more than 30 years. Grasmere has changed over this time and the Prince of Wales has certainly had mixed fortunes, but I am happy to say has now been restored to not only its former glory but far surpassed it as the newly named Daffodil Hotel.  Regular readers of this blog will have read my Prince of Wales Then and Now post, and more recently my post The Daffodil Hotel, A New Beginning.

Life in the tourist industry can be a long haul from Easter till the end of season. By the time October comes around we are all starting to flag a bit. But as my Mother-in law used to say “bear in mind these folk could have chosen anywhere in the world to take their holiday, and they have chosen here, make it worth their while”.  Wise words!. However time for a bit of “me’ time and where better to try than the newly opened  Daffodil Hotel Spa.

Nice to be met with a smile, and we were quickly changed into towelling robes and ready for our Rasul Room Treatment. What I hear you ask is that?. Well the name is of Ancient Middle Eastern origin. We went in to a room where various types of mud had been prepared for us to apply. Some smelt of chocolate, some were anti-aging, you get the picture, and no guesses which I chose !. You then go into another room which has two individual mosaic covered loungers which are heated. Lying on them a variety of relaxing aromas infuse the air, while coloured lights play across the ceiling. After some time the lights then brighten and a shower of warm rain falls from the ceiling to wash the mud away. Wonderfully relaxing!

Next to the pool. A series of different “experiences” awaited. There are six different areas in the pool, all with benefits to different parts of the body. Some lying, some sitting and some standing. Now it was at this point that we realised what a friendly place the spa really was. Watching our fellow bathers standing under three pipes which aimed various amounts of water on to them, everyone in the spa got a fit of the giggles. It was great because everyone was chatting away about the spa, the hotel and Grasmere in general. Lovely to hear such positive views about all three!.

Various areas in the pool

Would have made a great picture someone under one of the pipes but didn’t feel it was really appropriate!

On to the very large sauna and steam room next, and the same friendly banter. A real tonic. And guess what I found in the changing room. My favourite Pure Lakes products. 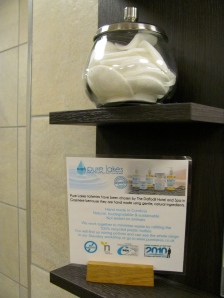 After a lovely afternoon at the spa we left feeling really ready for the rest of the season. So if you are at the Daffodil Hotel in Grasmere and wake to a day like this.

Why not visit the spa and leave feeling like this!