Living in the Lake District you do quite often get slightly fed up with the weather. Ok we all say “well you wouldn’t have the lakes if you didn’t have the rain” but sometimes it would be nice to wake up, pull back the curtains and see the sun shining!.

Grasmere Rushbearing is one such day. So much work goes into the preparation for this traditional Lakeland event that it’s fingers crossed all round for fine weather.

So guess what ? yet again this year it was raining. For the past few days the little tractor had been chugging backwards and forwards to the church full of rushes from the lake side. Everyone carried on getting ready, with more than a few glimpses towards the sky. 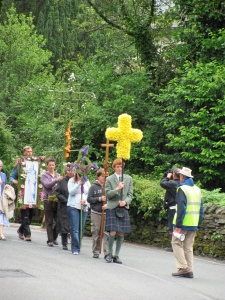 Then as so often happens, right at the last minute, the skies cleared.

There were still a few spectators balancing umbrellas but there was nothing like the torrential downpour that had started the day. 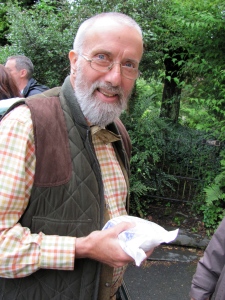 The great thing about Rushbearing is that everyone takes part. Taffy Thomas who is the current Storyteller Laureate had just finished doing an event in the storytellers garden and was watching the procession while clutching that other Grasmere tradition Grasmere gingerbread!

With being a busy tourist village, during the summer months it’s a case of heads down and on with work, but on this day we all come out and celebrate. Being in the tourist industry we tend to do a reverse hibernation. Don’t see anyone in the summer as so busy working, then come winter we all appear and have time to catch up.

One new adidtion to Rushbearing was spotted in the National Trust Information Centre. They have produced a greetings card and postcard of the Rushbearing painting by Frank Bramley RA which although purchased by public subscription by the villagers of Grasmere is in the care of National Trust.

Frank Bramley married Katherine Graham from Huntingstile Grasmere in 1891, hence his link with the village. He was a member of the Newlyn School of Artists. Newlyn was a small fishing village in Cornwall where the light was considered particularly good for painting outdoors. He started the Rushbearing painting in about 1900 and it took him four years to complete. It was exhibited at the Royal Academy in 1905. The painting is seldom seen, however I do hear that there may be plans to let the public view it during next year’s Rushbearing.

The Rushbearing procession winds it’s way round the village with a brief stop at Moss Parrock before heading back to St. Oswald’s Church. I don’t think many people realise just how heavy some of these bearings can be. 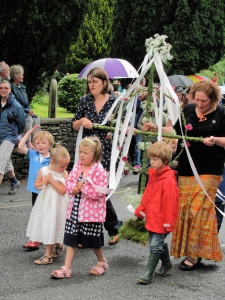 It is great to see such an ancient tradition being celebrated each year and to see the younger children enjoying themselves as much as their parents and grandparents did in the past. For more information about the history of Rushbearing please see the post I did earlier in this blog.